The two newest DOCSIS 3.1 modems to hit the market are the ARRIS SB8200 and the Motorola MB8600 by Zoom. Side by side– to the untrained eye– these new modems are the same with a few obvious physical differences. Such as the power button and the number of Ethernet ports. But one of these is the better option. We’ll cut the chase, this one from Amazon. 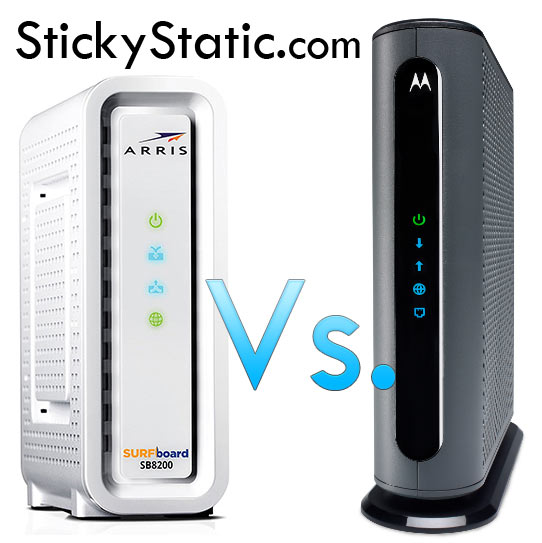 Now that DOCSIS 3.1 technology is upon us and Gigabit internet is becoming more and more common, many people are rushing out to buy one of these two next-generation modems. But it can be tricky as two major manufacturers are offering seemingly identical devices. That’s why we are going to break it down, piece by piece and offer you the better of the two modems, depending on your situation. Both of these modems are certified for Comcast Xfinity and COX.

Modem Similarities
Both modems are similar in the sense that they offer a Broadcom chip, 1 Gbps speeds and they are compatible with both Comcast Xfinity Gigabit and COX Gigablast. They both have good looking designs and offer a 2 year manufacturer warranty. Both modems have blue status lights for the DOCSIS 3.1 network and have 1 Gigabit Ethernet port capabilities.

Of course, both cable modems are entirely DOCSIS 3.1 with 2×2 OFDM bonded channels, and they are backward compatible with DOCSIS 3.0 containing 32×8 bonded channels. That’s 32 download channels and 8 upload channels. If you are purchasing this modem, chances are you already have the gigabit speed package. This means your LED connection indicator light will be blue instead of green so that you know you are connected to the 2×2 OFDM network. This feature is presented on both models.

Speaking of LED’s, many existing lower end modems have very bright LED lights, and when your lights are off at night, it can look like an alien craft landed in your living room. However, both of these modems address that issue and have soft lights, so they do not light up your entire living space like the 4th of July. This is important if you sleep in the same room as your modem. 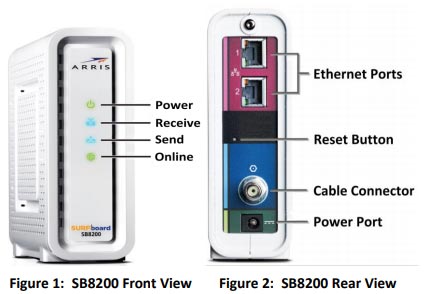 AQM Enabled
Both modems have Active Queue Management(AQM), which accelerates internet browsing page loads, online gaming, and live video conferencing. This takes place in the background and does not require user involvement.

Another similarity here. Both devices use the Broadcom BCM3390 chipset which is a strong point for the ARRIS and Motorola DOCSIS 3.1 modem. The alternative being the puma 6 chipset which has been deemed a “bad modem.” Do not buy any modem containing the Puma 6 chipset. It is flawed, and it is susceptible to DoS attacks and other hacks. And the most troublesome problem is the random spikes of latency causing your internet speeds to come to a crawl.

Installation
Another tie. Both modems are a simple plug and play. This means you plug it into your cable and call it a day. You will have to call your ISP and give them the MAC Address which is printed on a sticker on the bottom of the modem. Once they have entered this on your account, the modem will be activated and working. No hassle installation.

Major Differences
The major difference is the number of ports on the back of the Motorola MB8600 vs. the ARRIS SB8200. We’ll explain that in a minute as it is the big separator. Not only does the MB8600 have two more ports, it also contains a physical power button and more LED lights, of course making it bigger in physical size and weight. While it is bigger, people tend to like the design more and it even operates at a cooler temperature. But that does not leave the SB8200 at a loss on all fronts. While it has fewer ports, runs hotter, and is smaller in size, it has more internal memory and some people prefer a smaller white modem.

Both modems have Gig Ethernet ports on the back. But the MB8600 has four which puts it ahead in the battle by a landslide. 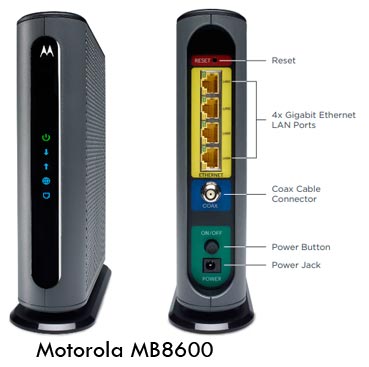 10/100/1000 Gig Ethernet Ports
Here’s the big difference. Number of Ethernet ports. Both modems can only get a max speed of 1Gbps, no matter what they may claim on the box. Why is that? Because internet companies do not offer more than Gigabit services.

This is why the MB8600 was honest with their advertising and said they could get a max download speed of 3.8 Gbps. They have four ports on the back. The problem here is that at this time, only one can be used for 1 Gig speeds. In the future, if a higher speed were to be offered by your cable provider, the MB8600 equipped with built-in Link Aggregation Grouping(LAG) or Ethernet Port Bonding, they could utilize all 4 Gig Ethernet ports and bring speeds up to 3.8 Gbps. Double that of the SB8200 with it’s 2 GigE ports.

But another problem arises. Besides the fact that no ISP offers such high-speed services, no consumer-grade wireless router is ready for 4 WAN ports. It would require 4 Gigabit internet services from Comcast or COX and a router prepared to host all 4 of those Gig channels. We’re just not there yet, and we will not be for a long time. So the MB8600 is genuinely the faster DOCSIS 3.1 modem, it can’t be used in such a way yet. It is future-proofed beyond foreseeable plans. Considering that these modems will be industry titans for a long time, this brings the 8600 to the front of the pack.

Verdict: More ports is the clear winner of this round. More ports, more Gig Ethernet, more speed. It won’t be happening anytime soon, but this modem will last you for many years to come, and it will be around when it matters. Plus one for the Motorola MB8600.

Internal Hardware Differences
This is where the SB8200 rises above the MB8600. It has 3GB of RAM where the MB8600 only has 512MB of RAM. But why? They both have the astounding Broadcom chip so you would think they are the same. But as you can see the SB8200 has a lot more RAM. Does it matter? Well, yes if you like numbers, no if you know better. It does have a lot more RAM. We’re talking five times as much memory. The problem that this is not going to make a faster modem by any means. The MB8600 will still be faster with 4 Ethernet ports(in the future). So for now as it stands, they are locked at the same speed of 1 Gbps by Comcast and COX, and that RAM and lack of ports gets you nowhere.

Verdict: More RAM is always better, right? Again, no, not in this case. The 3 GB is extreme overkill for a modem, and no one can figure out why they did this. Some even say this is the reason the SB8200 runs so hot. It has excessive RAM just consuming power and dissipating heat without reason. We’re going to have to hand this one to the MB8600 again for the cooler running modem with the right amount of RAM. But that’s not the only bonus here. Another solid point and an interesting claim made by Motorola is that the MB8600 has built-in advanced surge protection and lightning protection. I’ll take that over superfluous memory any day.

Modem Design Differences
ARRIS went with their standard design we’re all familiar with. It’s been used in many past generation modems from the SURFboard family. A smart move on their end because brand recognition may grab many customers. This popular design is white, small and uses a no fingerprint matte finish. The smaller size may grab many. But is that enough?

Motorola went the complete opposite way and veered from the competition. It is taller, grey, sleek, rounded, elegant looking and of course, also comes with the no retention fingerprint finish. This larger modem may require a little more space, but I think it looks better than the standard white overplayed design. Not only does the bigger modem have a better look for my setup, but it also runs cooler due to the more substantial amount of space for cut-outs providing airflow. The larger design comes with one more added benefit, 4 Gig Ethernet ports.

Verdict: The SB8200 may seem like the better choice because it is much smaller, but with a compact design comes a more crowded internal space, less ethernet ports and a hotter running modem. While it won’t melt down or anything, cooler is always better. One would imagine a hotter modem not lasting as long. However it is too early to tell if this will be a factor over a long period of time. The MB8600 is bigger and runs cooler because the larger space allows for more ventilation and airflow. It may be bigger but the color will allow it to blend in and hide. The smaller SB8200 is a bright white and will look like an iThing no matter where you put it. Many like the white design and consider this to be an advantage. So again this will come down to personal preference and the real design differences revolve around the heat dissipation. Even this may not matter at all. Just because the SB8200 runs hotter, does not mean it won’t last a lifetime. But we will declare the MB8600 the winner in this classification.

Price wise though, as you can see here, the Motorola wins the battle.

Now that we’ve covered all of the similarities and differences in the two modems by Motorola and ARRIS, we can see a clear winner. But it depends. If you want a genuinely future-proofed modem with 4 Gigabit Ethernet ports and a top speed of 3.8Gbps, you will have to get the LAG enabled MB8600.

On the other hand, if you do not ever plan on going over 1Gbps and you want a smaller hotter running modem, then the SB8200 will do just fine. So at that point, it comes to personal preference, and many may like the smaller white modem over the larger grey modem. So we’re leaving this up to you. They are mostly the same with differences that will not matter for a long time and even then, may not ever matter to you if you plan on sticking with 1Gbps internet and don’t mind your modem lacking a physical power button, get the SB8200.

And it does not end there. While researching these products, I called and spoke directly with a technical support agent for one of the nations largest cable internet providers. You know it was Comcast or COX, but I will not disclose this. He told me his issues with the SB8200 and said they are even on “Version 2” and that they had a lot of problems in the beginning and he would go with the MB8600. I used to be a Tier II Tech Support Agent for the largest DSL company in the US, so we had quite a long chat.

Let us know your thoughts and what you went with below.

Like all websites, we use cookies. If you continue to use this site or scroll, you accept this. European Law requires this statement.Ok