If you subscribe to Xfinity Voice home phone cable internet service, you need a voice modem.
This is a requirement, and there are no exceptions.

You can be sure that if you have a “land-line phone” with Comcast Xfinity Voice which is sometimes known as Triple Play or Xfinity Voice, then you must use an approved compatible voice modem with a phone jack such as the Motorola MT8733, ARRIS SVG2482AC, Motorola MT7711, Netgear C7100v Nighthawk, or ARRIS T25. 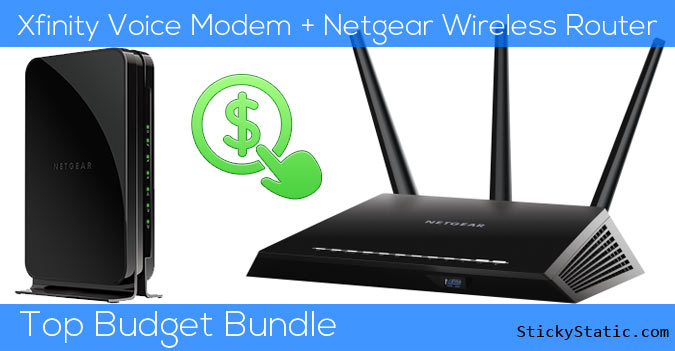 Now that you know if you have Xfinity Triple Play, there is no way around owning a compatible voice modem. So let’s help you find the best voice modem for your home. Sure, it may cost more upfront, but it will still save you money in the long run because you will no longer be paying the $14 monthly rental fees to Xfinity for using their xFi Gateway.

The good thing is the highly-rated Netgear C7100v is a combo modem router, meaning you do not have to purchase a separate wireless router; you get both in one device. A high-speed 24 downstream channel DOCSIS 3.0 EMTA voice modem and a powerful wireless gateway for Comcast Xfinity Triple Play Internet. It is far superior to the ARRIS SVG2482AC, but we have a much cheaper option below.

If you need DOCSIS 3.1 the Motorola MT8733 is the most powerful modem router with phone jacks.

First, the cheat sheet. A full chart containing all of the important factors for choosing a voice modem designed specifically to work with your Xfinity Triple Play package.

It is very important to understand that if a voice modem does not include a built-in wireless router, you will need to buy one separately to support your wireless devices in your home. This is why we give you both options for a modem only or a combo modem, so you may use what works best for your specific Xfinity Voice plan. Check out the distinct differences below.

Why use a voice modem and WiFi router in one?
These voice modems have the built-in wireless routers, so you do not need to purchase anything extra. They come in a single device ready for both supporting your Xfinity Voice Phone Line, cable internet, and all wireless devices in your home.

You will need your own router (House Size Router Buying Guide)

The CM500v paired with a cheap router is a much better deal than the C7100v combo. We suggest this if you have speeds of 200Mbps or less.

Note that the C7100v modem is not approved for speeds over 500Mbps. If you have Comcast Gigabit speeds and a Triple Play voice package, you are required to get a DOCSIS 3.1 modem with voice. This would be the Netgear CM1150V. The problem is that is a standalone modem only, so you will still need to buy your own router.

What if I am not using the voice line? Do I still need a voice modem?
Yes, you do. I called Comcast myself, and the bottom line is if you have Xfinity Triple Play– whether you use it or not– you need the voice modem with a phone jack. I have had readers also report that they tried, and Comcast would not let them use a normal DOCSIS 3.0 modem.

Is a voice modem my only option?
If you have Comcast Voice Triple Play, then yes. You must use one of the two telephony-compatible voice modems. Your options are very limited, but the Netgear C7100v is a solid DOCSIS 3.0 EMTA modem, meaning it is fast enough for Comcast packages all the way up to Extreme, Comcast Blast, and Performance. Get the best internet speeds Comcast offers, and they have a built-in Wireless AC router. Which one would we recommend? The Netgear C7100V, no doubt. See the differences below in the comparison chart.

Here’s where the going gets tricky. On one hand, you have the much cheaper and newer Motorola MT7711, and on the other hand, you have the older time-tested Netgear C7100V. Which one works best for you? Cheaper? Or one with added features?

While the Netgear C7100v is the clear winner as far as features go, the Motorola MT7711 is cheaper and will perform the same as the Netgear. The truth is, the Netgear really only has one solid thing going for it, USB ports. Now is that worth about an extra hundred bucks? To some, yes. For me, it is a requirement that my router has USB ports for a print server / external backup drive on my network.

But let’s be real, that is not going to be necessary for 90% of home users. So here we are, you and me, face to face with a final answer. You will want to get the Motorola MT7711 and save yourself some money. If you’re not a network nerd and you just want a cheap working device, you’ve found your modem.

It’s almost not worth bringing the ARRIS into the battle, but many of you want information on this unit because it is one of the top retail modems. But what none of them tell you is, it has a bad chip.

Because of this, in any given situation, I would pick the Netgear C7100V over the Arris SVG2482AC. The C7100v has a Broadcom chip while the ARRIS SVG2482AC has the flawed Puma 6 chip and is on the list of bad modems. This is pretty big because even after they released a firmware update, users are still reporting latency spikes and internet slowdowns. Making the very popular ARRIS voice modem not an option.

But even if the ARRIS SVG2482AC did not have a bad Puma 6 chip, it would lose this battle for many reasons. One, the Netgear C7100v is a faster combo modem/router, it has built-in USB ports for network storage, and the battle-tested Netgear GUI and firmware. Yes, the ARRIS SVG2482AC voice modem may have two physical USB ports on the back of the modem, but they are not for your use. They are for service technicians and will not host an external hard drive or printer. The firmware just isn’t supporting it. I consider this a huge flaw. They make no claims of the device even having USB ports in their marketing, yet they are there for service techs. This is the sole reason why I would get the Netgear C7100V. I love my network storage and backup. Rest easy. Never lose a photo or document.

The USB ports are not the only enhancement with the Netgear C7100V. As you can see, it has a slightly higher wireless throughput, which may be unnoticeable if at all noticeable, so do not let your decision ride on that. If you’ve ever owned a Netgear Nighthawk router before, you’ll be familiar with the Nighthawk built-in software, and I do prefer it over Arris’s GUI. That’s pretty much the consensus with most people in tech. So when it comes down to the higher cost, you have to ask yourself, do you need USB ports, want a better GUI / firmware, and care about a small speed increase that you can’t even notice unless you’re transferring large files over your local network? For me, the answer is yes.

You would get either of these if you wanted to use your own router.
You may think these modems compare, but they are in two completely different categories regarding technology, standards, and performance. We’ll keep this very simple.

The obvious conclusion is if your heart is set on a combo modem router, get the Netgear C7100v Xfinity voice modem. It is undoubtedly the winner between it and the ARRIS SVG2482AC. No competition when it comes to EMTA modems. But if you want the cheaper modem without USB ports, the Motorola MT7711 was just released and just for you.

If you want to use a separate router, as we prefer, then get the standalone Netgear CM500v voice modem and a wireless router of your choice. But nothing below AC1750.