Get Gigabit speeds with a DOCSIS 3.1 modem. Shown Here

As cable internet speeds increase to a gigabit and beyond, you will need a DOCSIS 3.1 modem to be compatible or approved for the gigabyte cable packages that ISPs continue to roll out nationwide. So, what is the best DOCSIS 3.1 cable modem for Comcast and COX? There are only three major contenders, Motorola, ARRIS, and Netgear. The market size is based on the fact that this is a brand-new cable technology, but we have been in the trenches, and we have the best of the best for you, depending on who your cable internet provider is. We have found that most people with Gigabit speed have Comcast Xfinity or COX Cable. Spectrum has yet to approve any modems for 1Gbps.

The MB8600 is our top pick, but it is not supported by all ISPs. In that case, the SB8200 is a great runner-up. If you want a detailed breakdown of the differences, view our full comparison. Motorola MB8600 vs ARRIS SB8200.

When it comes to an approved DOCSIS 3.1 combo modem router capable of 1 Gigabit speed, you can compare your choices. You can choose between the ARRIS SBG8300 and the Netgear C7800. The ARRIS has been much better in this field, and we would recommend it if you must get a combo modem. However, the stand-alone modem with your own router would be a better option.

When it comes to buying your own Gigabit modem to replace the equipment that your ISP rents to you, the choices may vary based on what modem each ISP approves as a compatible and recommended device. DOCSIS 3.1 is currently limited to a few choice modems, as it is a new technology with fewer cable subscribers. However, we do have some heavyweight contenders in the arena, and all of the dominant cable providers continue to deploy new markets nationwide. In the next few years, you can expect to have Gigabit Internet in all major cities.

Note: These modems do not have phone jacks. There are no voice modems for Gigabit available on the retail market.

With Comcast Xfinity currently the biggest ISP in the United States offering Gigabit speeds, you are likely here for a Comcast Gigabit modem. Not only are they the nation’s largest ISP to offer such speeds, but they are also expanding many new DOCSIS 3.1 networks as they roll out new infrastructure containing the groundwork for Gigabit to many new cities. You can check future Gigabit expansion plans here. As recommended above, the MB8600 is your Comcast-approved and fully compatible DOCSIS 3.1 modem for Xfinity Gigabit.

COX offers its own 1Gbps internet package by the name of COX GigaBlast, and it may very well already be available in your market. Check here. They also allow you to replace their panoramic modems with your own fully approved modem. COX recommends that you get one of their approved cable modems for GigaBlast such as the Motorola MB6800 cable modem. It is approved for COX and ready to go with its fastest tier speeds. Source.

But again, there is not a DOCSIS 3.1 modem router combo we can recommend. You will need your own WiFi router.

Spectrum Gigabit Modem
Spectrum also offers a wide array of DOCSIS 3.1 networks for its users to access Gigabit speeds. They have a list of Gigabit cities here.

Spectrum claims it will offer 1Gbps speeds to all of their customers nationwide by the end of 2018. They also say the minimum speed they will offer for any customer is 200Mbpps, but at the same price as their current 60Mbps prices. This means many users will have no choice but to upgrade their existing legacy equipment to higher-end, fully compatible Spectrum modems.

Now here’s the kicker. Spectrum has zero approved modems on the retail list for DOCSIS 3.1. Some customers have said the MB8600 has worked for them, while others stated it has not. So at this time, you have no option but to rent a modem from Spectrum if you plan on using their Gigabit speeds. I assume this is a strategic money grab on their end because the MB8600 works fine with Comcast Gigabit and COX Gigablast.

I will call Spectrum and ask them, but if you have, please let us know in the comments below.

Mediacom Gigabit Modem
Mediacom is coming fast with the Gigabit internet and lets you buy your own replacement modem as well. They even give you multiple options, such as the SB8200 or the CM1000. Source.

RCN Gigabit in Boston
While RCN is only serving the Boston area with its Gigabit plan, it will soon expand to the rest of the East Coast. But they are struggling to certify any DOCSIS 3.1 modems for their Gigabyte network. As it stands, you are unable to buy your own replacement modem. Source.

Wide Open West, also known as WOW offers Gigabit internet with the following modems. The SB8200 or the CM1000. Source.

DOCSIS or Data Over Cable Service Interface Specification, is a standard set for international telecommunications companies. Created by CableLabs, it is designed to allow cable TV providers to send high-speed data transmissions over the currently existing CATV network(Cable Access Television). DOCSIS 3.1 is the newest standard and has been around since the year 2013. However, not until recently have cable internet providers started offering high-speed packages such as Gigabit Internet. To utilize these higher-tier Gigabyte packages, you must use a compliant DOCSIS 3.1 Modem.

The current generation of cable modems is DOCSIS 3.0, but the future is arriving, and it is DOCSIS 3.1. The past standard, which has come and gone, was DOCSIS 2.0.

As you can see, the DOCSIS 3.1 standard has a long life ahead of it, and it’s barely even just getting started. Gigabit internet speeds will last a long, long time and won’t get replaced anytime soon. As it stands, there is no need for higher-speed modems. Maybe if we start streaming holodeck simulations or something fantastic. One can wish. They are toying with DOCSIS 3.1 Full Duplex, which could host speeds up to 10Gbps, but there is no network or equipment in place for this. They will do as much milking of Gigabit speeds as they can before spending on such an upgrade.

Now you have the best options for major cable providers such as Comcast Xfinity Gigabit internet. You are well on your way to the fastest internet you ever even began to imagine. The truth is you probably won’t even know what to do with all of that bandwidth. It is quite excessive. 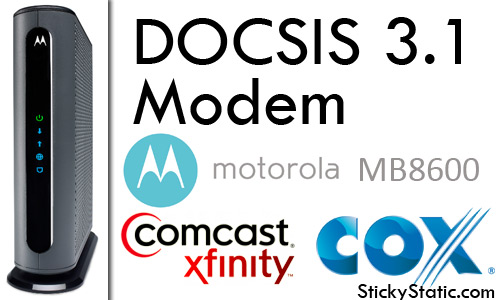