Jump to: [Mobstub Reviews by Readers]

I have had a few friends approach me asking what I think of MobStub and some friends even posting their spammy, scammy deals on social media sites after buying the item and getting ripped off. So I decided to expose them and their shady tactics.

Is Mob Stub A Scam?

Short answer yes. Note this is our opinion based on all these facts. They offer zero refunds, and often do not ship your items, lie and super inflate junk directly from China to sell to you. You can always buy the same stuff on Amazon.

Here’s a perfect example. This single Electric Salt/Pepper Grinder is $15 on Mobstub as you can see. But also note how they show you two and only mention at the very very last line on the bottom that you only get one. Scammy. Flat out skeezeball.
The funniest thing is they only recently made it “bold”. You know that means they got many complaints for thois sneaky tactic.

Guess how much on Amazon? That’s right. And you get both of them for that price. This is actually a much better model. Unlike Mobstub who is using a generic no label product from China. This can be proven about almost every product that they sell if you do your research before buying.

You know what else is scammy and sleeze? That Daily Deal Ends timer is permanent. It never ends because it is not a deal. And the “retail price” is laughable. They already lost all credit, but wait, it gets worse.

It’s Junk
I’m not kidding. Anything you find on Mobstub is a cheap knock-off of a solid product. It is almost all made in China, and a lot of the electronics arrive broken without replacement because they do not offer refunds.

For instance, the battery chargers on Mobstub are a cheap knock-off of a hot-selling flash charger from Amazon. The one Mob Stub offers could even damage your phone according to some user reviews. Be sure to search for anything you find on Mobstub on Amazon first because you will almost always find a better price and you get Amazon’s customer service.

You’ll notice that a popular item on the daily deals are purses. They are not what you think you are buying and you are lucky if they even get shipped to you. Read the Mobstub reviews and complaints below for actual customers who bought the purses. Some were lucky enough to get them but were very disappointed with the actual product if it even arrived.

Many report terrible chemical smells, purses being much smaller than advertised, not able to even fit a wallet or clutch, very poor quality, straps/handles that come apart, zippers that fail, and more.

As for the jewelry, again, read the complaints. It’s all Made in China junk. Small, low quality, poor design, cheaply made jewelry not suitable for a child.

Because they are importing pure knock off junk from China, it is often dangerous and unregulated. People have reported chargers catching on fire, burning out their phone batteries and more. If you are going to buy anything electronic, make sure you buy it from a reputable source and not some fly by night “Daily Deals Site” like Mobstub that is dropshipping from China.

No Refunds, No Returns

The first hint should be the NO REFUNDS POLICY. No reputable online service has a nonreturn policy. When buying electronics, I would always go with Amazon as they tend to have an excellent refund policy and even sell extended warranties to cover your items for years to come. Amazon has amazing customer service, and they have always sided with me when I have had a problem(only twice).

Update: They now claim to have a return policy “unless otherwise stated in fine print”, yet people are saying they get no response form customer service and the 30 day return window closes on them.

With MobStub using 3rd party Chinese knock-off electronics, you have a high chance of receiving an item that is DOA(Dead On Arrival). This is always a risk, even when ordering items on Amazon or going directly into a brick and mortar storefront like Best Buy. But when you do buy these items on Amazon, and they arrive broken, Amazon doesn’t even question you. They start to satisfy you, the customer, let you ship it back at no charge and replace the item. Not Mobstub however, they just ignore you because there was a small line of text saying “Final sale not eligible for returns” on the page.

Trash shipping. I Did Not Get My Package!

Good luck on tracking your shipment or getting a hold of customer service.
If you do any research on this online deal outlet liquidation powerhouse Mobstub or whatever they call themselves, you’ll find countless people who never got their packages and were not refunded by Mob Stub. In most cases, they did not even get an answer from customer support. Proving even more so that Mobstub.com is not trustworthy.
I believe this is because they pick such cheap fly by night items from random sellers, that they often exceed the supply of those janky Chinese sellers and instead of refunding you on an out of stock product, they simply don’t send it and keep your money. Again, this is just my theory and the reason they do not ship or refund you is truly unknown. On their own website they claim to take care of these problems but based on all the internet chatter out there, they just don’t or choose to ignore a large portion of the people. Which in it’s own is enough reason to boycott Mobstub.

Many people report reoccurring payments they did not authorize.
You’ll notice many reviewers say they get reoccurring charges after a simple one-time purchase. They get no help from Mobstub and have to challenge it with their banks. This is an added headache no one should have to deal with. 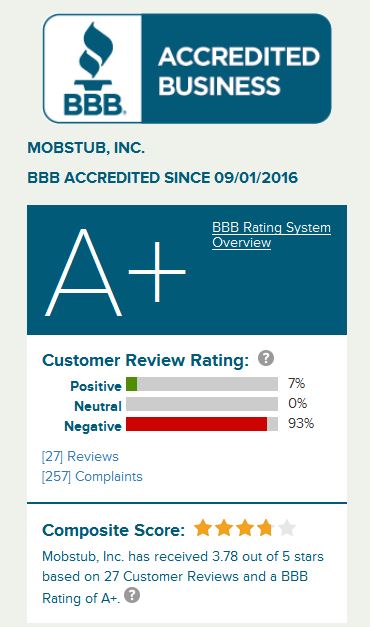 Better Business Bureau Report
As you can see the BBB confirms that MobStub sucks with a generous rating of a D+. How they even got out of the F- category is beyond me. Maybe because most people don’t think to report when they get ripped off.
Update! They are now at the lowest rating of F and people continue to call them out across the web. Do not buy from Mob Stub!
Update! They somehow went from D+ to F to C+ to A+ which is super unlikely and means they may have used the super sketchy tactic of faking their own reviews.
You can even see on the review they have at this point 257 negative complaints with 27 positive reviews. They have gamed the system faking a few reviews to overcome the complaints which do not count towards the rating. That system is broken.
It seems they are even sending shill traffic here with fake reviews. They are trying to put their dirt under the rug.

MobStub Bottom Line
The conclusion or bottom line with MobStub is that it is indeed a scam. A brilliant one at that. They take the cheapest low selling items straight from China on Alibaba, wait for you to order it from them and then buy it and ship it to you. In other words they “drop ship” you junk that you could have bought yourself, cheaper with a return policy from Amazon. Also, they have these “Deal Ends” timers that mean nothing. They just reset.

I encourage you to share this with anyone who uses or is considering using MobStub. Don’t let friends buy junk at up to 10x the cost with no refund policies.
Also please comment with your Mobstub experiences below. 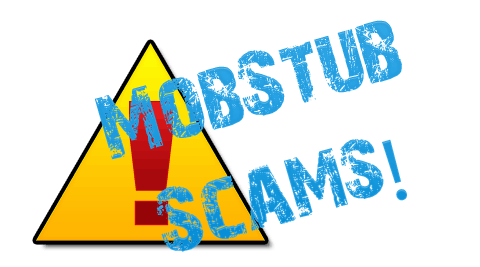 Seriously good luck on that one.
And as a reader mentioned below, they are not at their listed address in New York.

Now continue on to read comments left by actual Mobstub customers. These are buyers who reached out after being scammed by Mobstub Daily Deals. If you’ve been scammed, please comment below.

Gerry D worked a long career in technical support with a strong networking background. With his advanced computer knowledge, he founded StickyStatic to help others make the right choice when it comes to tough networking decisions.

Gerry D was a Tier II Internet Tech Support Agent for many years working for the 2 largest internet providers in the United States. After that, he went on to high-end Tech Support in a large educational institution. So modems and routers are some of his favorite toys.

He wants to make sure you leave here with the right choice for your home wireless, happy enough to recommend StickyStatic to your friends.