Build It Yourself and Save Gaming Builds

Note: A lot of these computer prices have changed due to high demand on graphics cards and RAM for bitcoin mining.

Build your own Office Computer

Windows 10 USB Stick:
Not everyone already has access to Microsoft Windows so you may need to buy it. This version comes on a USB stick so it is perfect for a new gamer machine. It is 64bit which is required to use more than 4GB of RAM. Windows 10 USB Install.

In this next section, we will list all the separate components to a desktop and give you an understanding of the role and importance of each component.

The CPU is the core of your system. While you do not need the most powerful CPU for a gaming build, you do need to make sure the motherboard is compatible with your CPU socket. There are a few basic processors, chipsets and sockets available when it comes to a gaming pc. All of our builds are paired with the right chipset and motherboard, so you do not have to worry about incompatibilities with any of these builds. In some situations, we offer the “upgraded” version, and if you do switch the CPU, you must get the new motherboard as well for compatibility.

Cheaper AMD Ryzen Processor:
If you’re really on a budget, the AMD Ryzen 3 is a good solid choice, and many people do choose to go with the new AMD Ryzen CPU over the Intel i3. If you have the money, the Ryzen 5 is the way to go, but I have the Intel i5 build. I’m just a brand name loyal kind of guy. You do not need the Ryzen 7 or the Intel i7 for a gaming computer. This is overkill as today’s games do not utilize the full potential and the 5 series will be more than enough.

So this is the hardest part for most people because there are too many options and one wrong move and nothing will work. First of all, there is size. Mini ATX is always the cheapest board but at the cost of real estate. These boards are generally all you need for a beefed gaming computer, but they generally do not allow for 4 RAM slots or a second graphics card. That is fine in 90% of builds.

Socket type:
This is where you must stick to the build to get the proper socket type. For example, the Ryzen 3, 5 and 7 must have an AMD AM4 motherboard and the newer Intel Skylake must have an 11LGA 1151 board type. If you do decide to go for another board, be sure to match the socket type. It is the most important value when deciding on a choice for you. 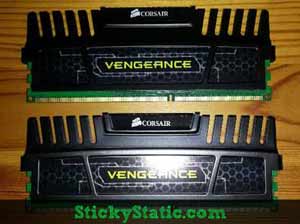 Any system running 8GB of DDR3 or the newer DDR4 PC Memory, will be fine in today’s world, so if you’re on a budget, get 8GB of RAM. The good thing about RAM is that you can always very easily upgrade it later. 16GB would be overkill, but I have 32GB of memory. You seriously only need 8GB, so do not worry about not having enough power.

There are 2 main manufacturers of graphics cards on the market today. AMD and Nvidia. There are quite a few players in this field from EVGA, MSI, Radeon, Sapphire, Gigabyte, ASUS and more. They each stick to one of the GPU’s or the other for their GFX lines as you’ll notice.

Mid Range GFX Card:
I don’t list a low range video card because you don’t want to go there for gaming. But a good mid-range card can start at 4GB of GDDR5 Memory. The current market killer is the GeForce GTX 1050 Ti in both the Ryzen and Intel power build above. With technical advancements, powerful gaming cards have become cheaper, and you stand to benefit from this. The AMD R series cards are pretty much all out of stock for month son end due to the bitcoin mining craze. It used to hold true that they were up to 3 times more efficient for mining due to a process in the cores. This does not mean they are better graphics cards or that there is anything wrong with the GTX 1050, GTX1060 or any of the higher end cards. They are great gaming cards, and I have the GTX 1050.

High End Video Card:
For some, midrange is not enough. Maybe you want to ultra 4k game. If you must, the GTX 1080 Ti is a beast and can be used for 4k Gaming. It is listed in i7 Build above. I could not imagine ever needing such a setup, but maybe you have the money. That’s the way to go. 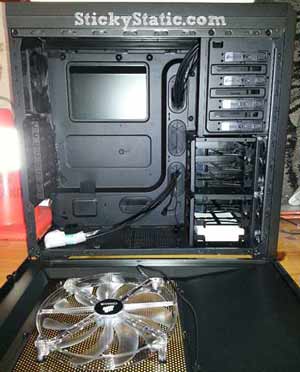 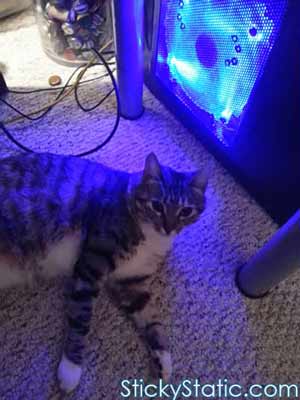 First you have to make sure that a case or chassis that will have enough room for your hardware components and enough fans and air flow to keep your computer running cool. Mid ATX and ATX cases will always have enough room. It’s once you start trying to cram big ole graphics cards and coolers into a Mini ATX that you start to have a problem.

I went with the Corsair 500R (actual photos) even though I recommend smaller cheaper cases in the budget builds. If you have the extra money available, you should pick one of the spiffy looking cases from above. Why create a powerful computer if you’re going to make it look cheap? Unless of course, you’re on a tight budget to keep cost down.

I went with the Corsair 500R because it has a lot more room, the two front ports are USB 3.0 and the fans included are LED. It also has a lot more airflow due to the size and vents. That can save you money because you don’t have to buy a special water-cooled unit or extra heat sinks. Mine runs cool on all fronts. Sure it’s big, but I want it to look big and powerful. Because it is.
Why the more expensive case?
(2) Front USB 3.0 ports
Front headphones and mic jack
Front fire-wire
(2) Front intake 120mm LED fans included
(1) Rear exhaust 120mm fan included
(1) Side huge 200mm gigantic LED fan included

You would think this computer case sounds like a hover jet taking off, but it is the quietest computer I have ever owned. It’s a whisper. And the LED fans turn off and on via a switch on the front so you won’t have to worry about the glowing spaceship in the corner at night.

With the 200mm LED fan, it looks pretty impressive and even my kitty loves this case(or just attacking my feet).

Of course, you’re going to want a good fast computer processor. This is the heart of your desktop computer.
I did a lot of research on this topic because you have the newer more expensive Intel Core i7 or the workhorse sturdy cheaper Intel Core i5 Quad-Core Processor
What I found out was that in the long run for a gaming PC the Intel Core i5 is perfect. And what a surprise, the best seller.

Intel i5 vs i7 you ask?
It turns out the added benefit for the i7 is hyperthreading, and most video games do not use that technology yet, so it’s the same having an i5 but a lot more expensive. You would only get the i7 if you had money to throw away. For gaming, for now, the i5 is superior at it’s lower price range.
Read more about it here if you’d like.

AMD vs. Intel
Now the problem is you have the cheaper AMD and the slightly more expensive Intel i5. Which is better for gaming? Pros and Cons? Wel, the i5 is still better for gaming even with the new R5’s. It is better at single core, power consumption, higher clock speed and more.

Bottom line is the AMD performs better by ever so little on multi-thread events(almost not noticeable) but the Intel i5 kills it for gaming by far on single threaded benchmark and consumes a lot less power. So I guess it’s an easy decision if you have the money you go with the i5 for gaming. If not, you’ll survive with the AMD.

But when you go to budget, the R3 vs. the i3, the Ryzen is the winner here.

You Should Get A SSD For Gaming:

Wow, how times have changed. With the new SSD hard drive technology, you no longer have to get a huge magnetic disk hard drive running at 7200RPM to host your Operating System files. You can get an SSD (Solid State Drive) which is more like a flash drive for pretty cheap these days. These things have no moving parts, so they write almost instantly speeding up overall everything by far. No moving parts mean nearly instant data transfer. You don’t need a huge SSD hard drive, just enough to host all of your operating system files. I recommend the 250GB SSD for Windows OS and program files paired with a 1TB HDD for normal storage. The reason this is good is that the Windows OS is hosted on the SSD and all essential task are immediate, and you can even boot your computer in a few seconds. Going to sleep and resuming is almost as quick as moving your mouse to stop your screen saver.

If you’re worried about the actual construction of the computer components, I would say don’t. If you have any hardware experience such as upgrading your memory, swapping hard drives, installing a DVD burner or even a new fan, then you will be able to assemble the computer from the ground up with no problem. The connectors and pins are all labeled; everything is clear if you have half a brain. Especially if you get a large case. It has a lot of room to move around in.

Do I even need Arctic Silver 5 Thermal Compound?
All processors above do come with thermal paste pre-applied to the heat sinks so the answer is no, it is not required. These cooling systems work fine and are built to operate at normal temperatures out of the box. The manufacturers would not ship units with non-functioning cooling methods. However, the enthusiast will say you do need something such as Arctic Silver 5. This is only true if you plan on reseating a CPU or switching one out and reapplying the paste. Today’s CPU’s operate at a much colder temperature by default, so this paste to me is a thing of the past. I use stock cooling paste, and my computer operates at below average temperatures for the i5.

Anti-Static Wrist Strap, Do I Need One?
Because you’re going to be working directly with sensitive electronics, it is recommended that you stay grounded by wearing an anti-static wrist wrap. If you feel you can do it by holding onto something yourself, go for it. I do not wear one when working on computers or building them. I keep one hand(or part of my arm) on the metal part of the case and ground myself. After that, it is not likely that I will be building up static. I make sure not to rub my feet around on the ground. I’m building a computer here, not trying to shock a co-worker.

Gerry D worked a long career in technical support for internet providers with a strong networking background. With his advanced computer knowledge, he founded StickyStatic to help others make the right choice when it comes to tough networking decisions.

Gerry D was a Tier II Internet Tech Support Agent for many years working for the 2 largest internet providers in the United States. After that, he went on to high-end Tech Support in a large educational institution. So modems and routers are some of his favorite toys. He wants to make sure you leave here with the right choice for your home wireless, happy enough to recommend StickyStatic to your friends.